This easy peasy Instant Pot French toast casserole can be made with brioche, challah, or French bread and is drizzled in a delicious cinnamon-kissed custard. To makes things even more irresistible, it’s topped with a sweet praline crumble and drizzled with vanilla icing for a cinnamon roll french toast vibe we’re head over heels obsessed with!

Now that the holiday season is in full swing around here, we’ve been brunching it up on the regular with friends and family.

This Instant Pot french toast casserole makes a perfect (and impressive) main dish breakfast, brunch, and even brinner if you’re a breakfast food fiend like myself!

Instead of dipping and cooking each slice of french toast on its own and slaving away in the kitchen when company is over, this scrumptious french toast cooks all at once, casserole-style, in a creamy custard of eggs, milk, cinnamon, and sugar.

Because I’m all about the toppings, I took my french toast to the next level by adding a praline crumble topping and a sweet vanilla icing on top, giving it a total cinnamon roll vibe that I can’t get enough of!

This post is sponsored by Nellie’s Free Range Eggs as part of a tasty ongoing partnership! I’m very particular when it comes to my eggs and we’ve been choosing Nellie’s for well over a year now. Their free range and Certified Humane® eggs come from independent, family owned and operated farms across the United States.

Lesson of the day – recycle those egg cartons, yo! 90% of the time we recycle ours right away and the times we don’t it’s so we can upcycle them! My daughter uses the cartons to hold her finger paint and the little egg cups are perfect for holding all the different colored paints for her masterpiece.

In hopes of being as helpful as possible, I made the instructions below pretty darn detailed.

Don’t be intimidated! This Instant Pot French Toast Casserole is actually crazy easy to make! I’ve made it 4 times so far this holiday season for family and friends. Love. it. so. 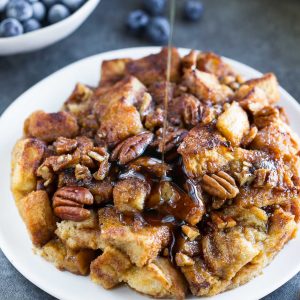 This easy peasy Instant Pot French toast casserole can be made with brioche, challah, or French bread and is drizzled in a delicious cinnamon-kissed custard. To makes things even more irresistible, it’s topped with a sweet praline crumble and drizzled with vanilla icing for a cinnamon roll french toast vibe we’re head over heels obsessed with!

French toast casserole is best when made with drier, stale bread.

You can leave the bread out on the counter the night before making this dish or cut bread into 1-inch cubes and bake spaced on two baking sheets at 325 degrees F for 20-25 minutes. Easy peasy!

The orange zest is optional but adds a little extra flavor to the casserole that I just can’t get enough of! It almost ends up tasting like orange cinnamon rolls if you’ve ever had them!

Nutrition Facts below are estimated before optional icing using an online recipe nutrition calculator. Adjust as needed and enjoy!

Looking for a small-batch version of this recipe?

You can totally cut the recipe in half if desired! The halved recipe will fit perfectly into a 7-inch cake pan, push pan, or springform pan. If using a pan with a removable bottom, be sure to tightly wrap the bottom of the pan with foil to prevent any liquid from sneaking out.

You will also want to change the cook time from 28 minutes to 15 minutes high pressure with a quick release at the end. Easy peasy!

If you get a chance to try this cinnamon-kissed Instant Pot French Toast Casserole, let me know! Leave some love in the comment form below or tag your photos with @peasandcrayons on Instagram so I can happy dance over your creation! I can’t wait to see what you whip up!