Sweet and Sour Cucumber Noodles make a fun and refreshing salad! Spiralized cucumber noodles are tossed in a yummy homemade sweet and sour dressing and topped with toasted sesame seeds.

Today’s post is brought to you by the letter B.

Buckets of blueberries. The berry picking season here in North Carolina is super short so I’ve made it my goal to pick and eat my weight in local blueberries. They’re a little less sweet this year due to a sunshine deficit and that’s exactly how I like them! It’s essentially nature’s version of Sour Patch kids. I’ll freeze some to bake with eventually but for now, they’re entering my face by the fistful!

How on Earth does it grow so fast and how can I make it stop?!

She’s all over the place and chatting up a storm lately.

Her new favorite word is “cat” which she squeals at Paul’s ginger kitty all day long.

, the third and final installment of Leigh Bardugo’s Shadow and Bone series. The first book was entertaining, the second was AMAZING and the third? I need it. Yesterday.

I’m also butt-crazy in love with Allie Brosh’s Hyperbole and a Half: Unfortunate Situations, Flawed Coping Mechanisms, Mayhem, and Other Things That Happened.

It’s essentially my happy place in book form and already has a permanent spot on my nightstand out of sheer necessity. Crap day? All I have to do is read the goose chapter and I’m guaranteed a good pants-wetting belly laugh. I’ll probably end up purchasing the kindle version for travel because simultaneously crying, laughing and, peeing yourself on an airplane is the only way to fly.

I’ve had Vampire Weekend’s Step on repeat lately. I also find myself listening to Turn Down for What no less than 1000000 times a day because it makes the baby squeal, clap and shake her booty and well, I wouldn’t be able to be typing this right now if it weren’t for that song

I’ve done too many of these bad boys lately. On one hand, I want to throttle whomever came up with this ridiculous exercise but part of me kind of likes the abuse. My core is finally starting to strengthen a bit and I can kick up into a wall handstand which for me is pretty epic. I’ve been practicing for weeks and taken the floor to the face one too many times. Yes this means I’m still sipping slurping chugging the CrossFit kool-aid. I can’t help it; it hurts so good.

Shush, you! I needed a B! Once I start playing the alliteration game I refuse to deviate.

When I’m feeling fiery I had a little sriracha chili sauce to the dressing.

Paul, however, adds a lot… and then runs circles around the room squealing and fanning his mouth. It’s beyond entertaining! 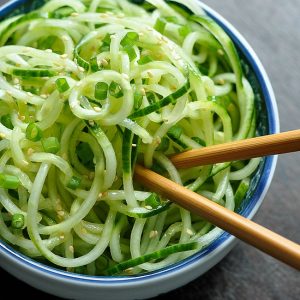 Sweet and Sour Cucumber Noodles make a fun and refreshing salad. Spiralized cucumber noodles are tossed in a homemade sweet and sour dressing and topped with toasted sesame seeds.

Nutrition Facts below are an estimate gathered using an online recipe nutrition calculator. Adjust as needed and enjoy!

so… how do you make cucumber noodles?

It’s easy! Simply grab a giant English cucumber, a spiral slicer (though a veggie peeler works too), and go nuts!

When you have a spiralizer handy it’s so crazy simple. Slice off the ends of each cucumber (a flat base attaches best) and sandwich it between the blade and the pointy end of the handle. Then crank it and watch as your cucumber turns into tasty veggie noodles! Even my kid can use it, so it’s totally foolproof and as much fun to make as it is to eat!

If you get a chance to try these Sweet and Sour Cucumber Noodles, let me know! You can leave me a comment here (LOVE checking those daily!) or tag @PEASandCRAYONS on Instagram so I can happy dance over your creations. I can’t wait to see what you whip up!