Side Dishes
Jump to Recipe 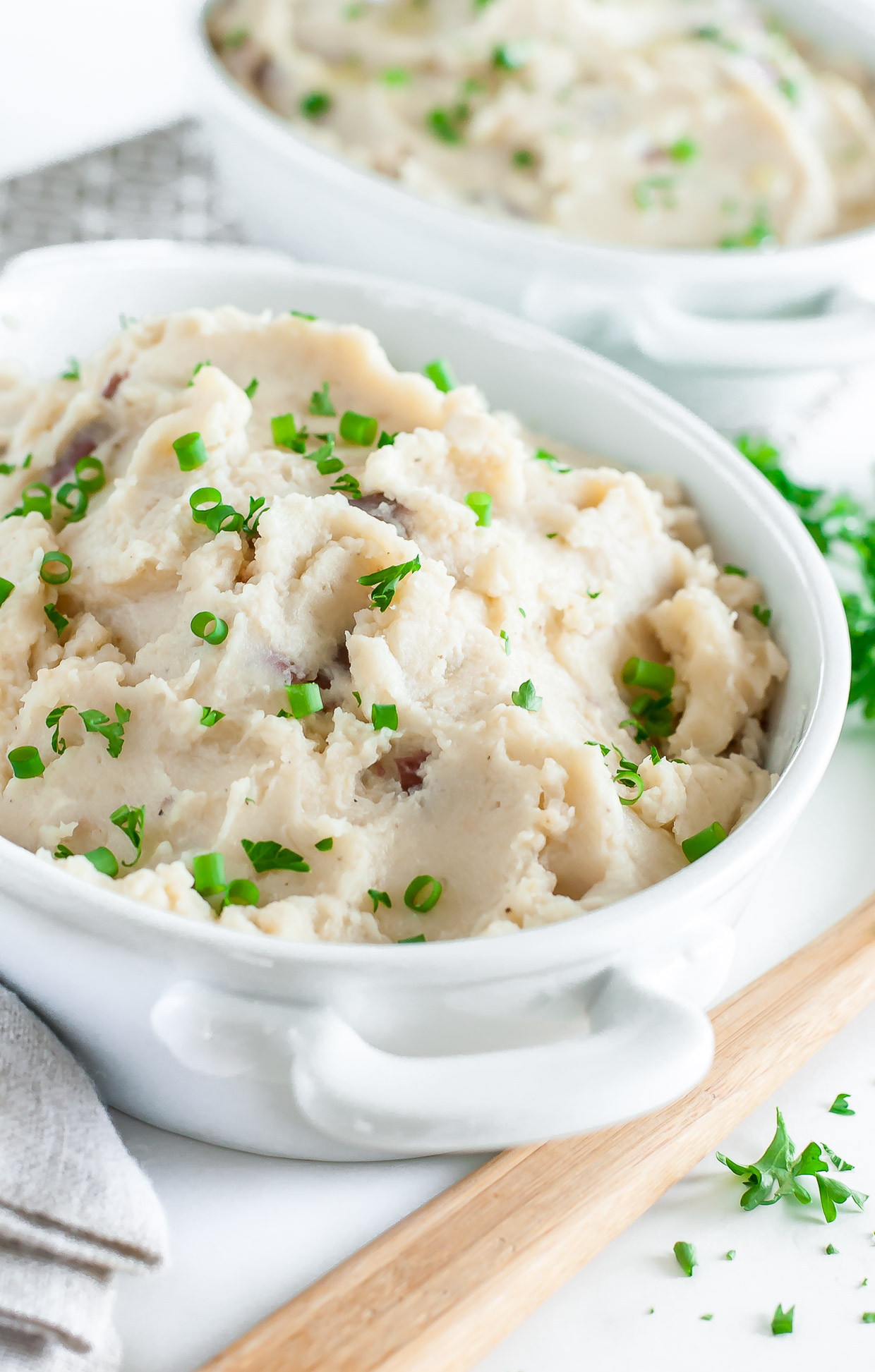 As if the past month of recipes weren’t indication enough, I’ll come out and say it: I’m cuckoo for cauliflower. So much, in fact, that my husband has turned into the most paranoid of test subjects. Nearly every meal that hits the table lately merits the slightest of eyebrow raises.

“So…. is there cauliflower in this?”

Hidden cauliflower. Aside from being a terrible band name, it’s apparently a subject of great turmoil for this hungry pilot of mine. He licks his plate clean either way but the skepticism remains. He truly thinks I’m out to put cauliflower in everything. So what’s a gal to do?

This was less of an attempt to tease my husband and more of an eureka moment. While he was about halfway done scarfing a bowl of mashed potatoes, he defaulted to his cauliflower questioning and suddenly I really wished there had been cauliflower in them. So naturally there’s only one logical thing to do…

PUT CAULIFLOWER IN EVERYTHING!

The following week I got to work with some help from my trusty crock-pot and made our little running joke a reality. It. Was. Delicious. 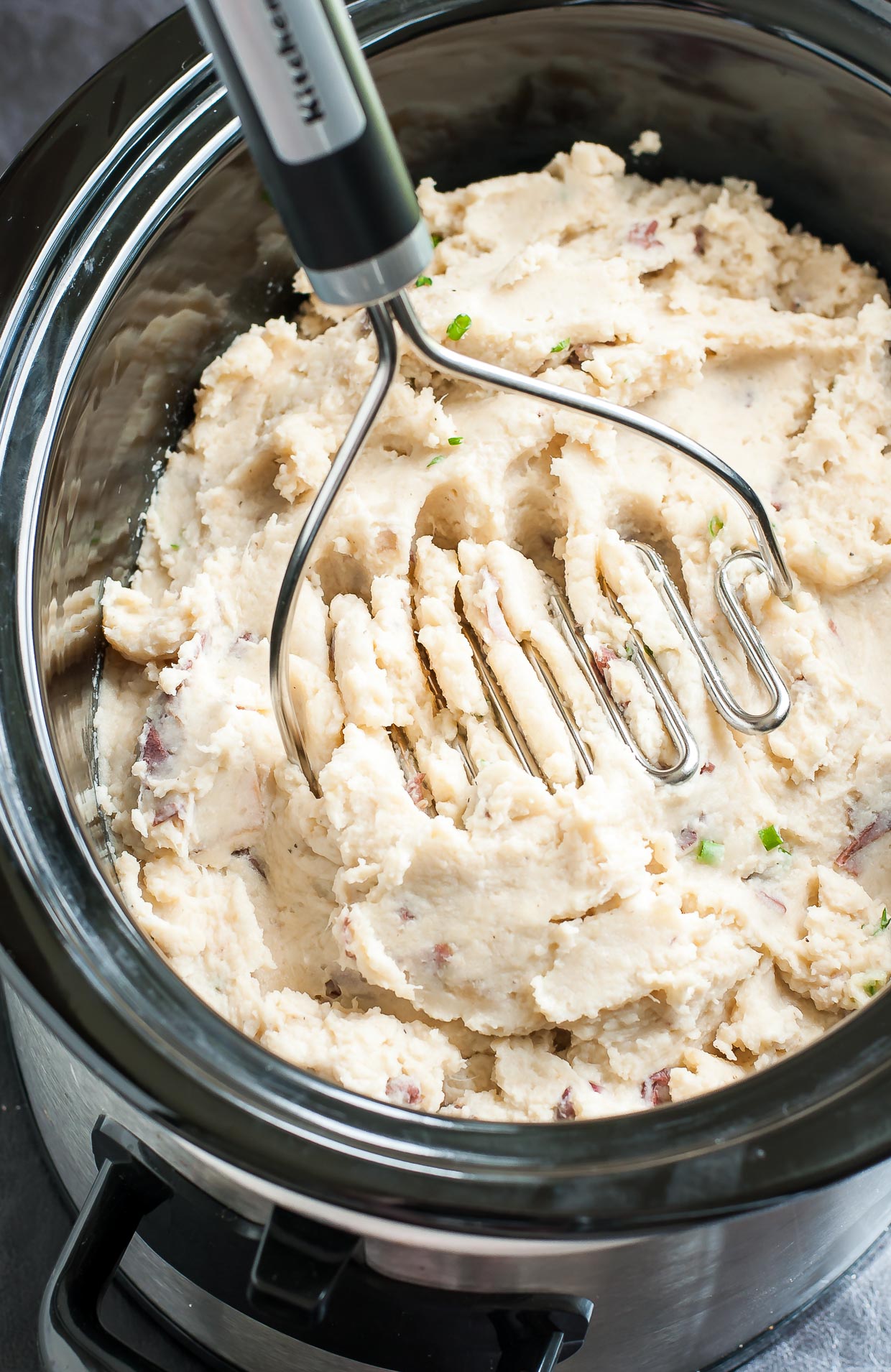 The results were nothing short of magical. The cauliflower and veggie broth all but took over for the role of milk here, softening and thinning the potatoes just enough to give them a luscious creaminess that I’ve come to expect from mashed potatoes. Using skin-on red potatoes gave them the perfect thickness with a smashed potato texture and the garlic, greek yogurt, and cream cheese combo made them flavorful and faceplant-worthy for sure. The butter doesn’t hurt either; I’m my mother’s daughter after all!

“Is there cauliflower in th–“ 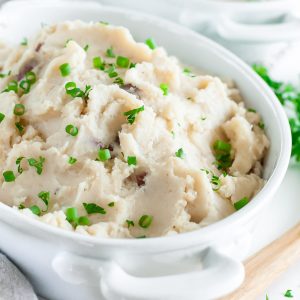 Want to get a leg up on your holiday meal planning? This super tasty slow cooker dish can be made up to 3 days in advance! It reheats like a champ (you can use the oven, stove-top, microwave OR slow cooker on the warming setting) and tastes amazing every which way! We basically lived off this sassy side for 3 days straight after making it and cannot wait to make it again!

Garnish with all your favorites! Add anything from green onion to parsley to cheddar and bacon. Anything goes! 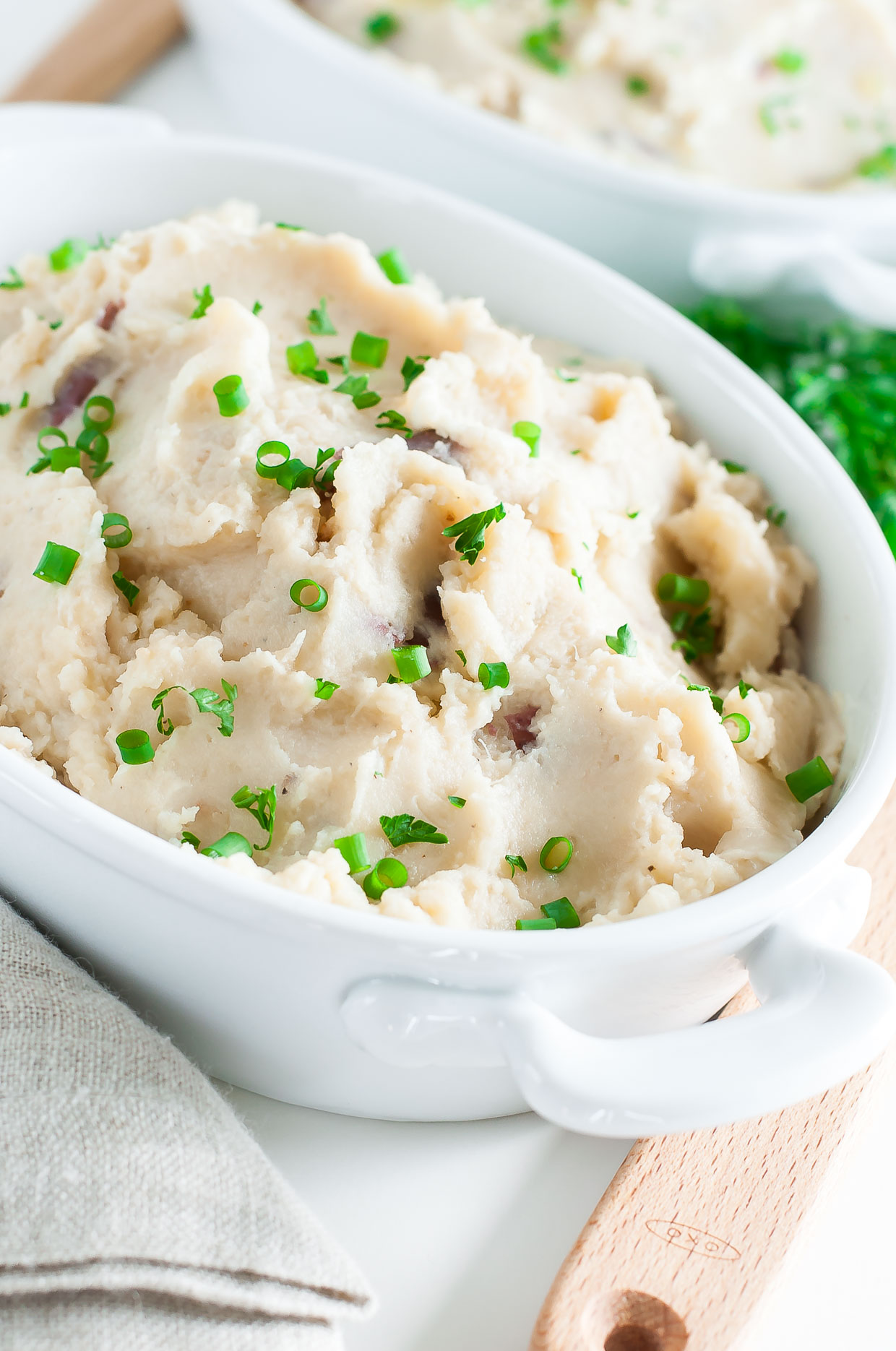 How perfect are these Slow Cooker Creamy Cauliflower Mashed Potatoes for Thanksgiving!? An easy side dish that won’t take up coveted oven real estabe AND frees up all 4 burners on your stove top? SCORE! This year I’ll be whipping up round 2 of this fluffy mash in one slow cooker and a big batch of crock-pot cranberry sauce in the other. A mini-batch of mashed sweet potatoes might need to make an appearance too because I hate having to choose between the two!

I’m a side dish junkie. I like them all to have their separate spot on the plate, but certain foods must be mixed! I like swirling peas and green beans in my mashed potatoes, adding cranberry sauce to my turkey, and dunking stuffing in sweet potatoes. Sometimes I’ll get extra feisty and attempt to snag a teeny bite of everything on one fork. It takes a little precision but the payoff is DELICIOUS!

When it comes to Thanksgiving dinner are you a side dish mixiologist or team no-foods-must-touch-EVER? Spill it!

All commentsI made this