Side Dishes
Jump to Recipe

This sweet and savory baked apple cranberry stuffing is the best of both worlds! Sweet apples and cranberries kissed with cinnamon then baked into a warm Thanksgiving stuffing… DELICIOUS! See recipe card for both oven and slow cooker instructions!

When the Thanksgiving prep rolls around in this kitchen, I can’t help but employ the tasty stuffing shortcut my mom served up pretty much my entire life.

Her ridiculously delicious veggie-loaded stuffing recipe relies on Pepperidge Farm Stuffing Mix as its base and I love it so much that I couldn’t imagine Thanksgiving without it!  I was feeling a bit nostalgic when Campbell’s asked me to peruse their massive recipe arsenal over at Campbell’s Kitchen and instantly sought out a new stuffing recipe to whip up.

Their baked apple cranberry stuffing is nothing short of AMAZING!

I’ve whipped it up a few times now and it has been amazing every which way we’ve tried it. Honey crisp apples have to be my favorite so far, and I’m a huge fan of chopping my cranberries into little bits so I get lots of delicious cranberry flavor in every bite!

You can bake this super tasty stuffing in the oven or use the slow cooker instructions at the bottom of the recipe card to make this Crock-Pot style and free up oven space on Thanksgiving! Woot! 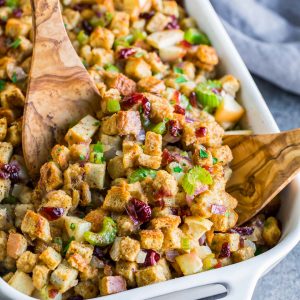 This savory sweet baked apple cranberry stuffing combines the best of both worlds! Sweet apples and cranberries kissed with cinnamon and baked into a warm Thanksgiving stuffing… it's DELICIOUS. Oven + Slow Cooker Options.

* Feel free to use veggie broth or chicken broth here.

** I’ve used honey crisp, granny smith, and pink lady apples for this recipe and loved them all! Honey crisp is my favorite if you have one!

White, Yellow, and Red Onion all work fabulous for this recipe! My favorite is to use a combination of yellow and red onion. The flavor combo is outstanding.

I didn’t use salt here since the broth and stuffing mix I use are already perfectly seasoned. Feel free to season to taste as you see fit and if you use plain cubed bread in place of the stuffing mix, season it well with your favorite herbs and spices, as the mix I used was pre-seasoned.

Recipe yields 11 servings at 3/4 cup each. Nutrition facts below are an estimate provided by an online nutrition calculator. Adjust as needed! xo

Why have I not been doing this all along? AHHH!

I love love LOVE the addition of cinnamon, apples, and cranberries in this baked apple cranberry stuffing! We seriously cannot get enough of it!

The aromatic veggies buddied up with the naturally sweet fruit so effortlessly and flavor was out of this world. I totally get the lure of adding a little sweetness to stuffing now – so good! Some lightly toasted sliced almonds or chopped walnuts might also be super fun added to the mix — I am dying to try that out now too!

I think it’s safe to say that I’ve officially broadened my stuffing horizons. It’s also a bit weird to say that… but whatever, it was yummy.

The sweetness of the cranberry and apples in this stuffing make it a perfect pairing for savory vegetables.  If you have some leftover the next day, I highly suggest stuffing it into mushrooms, acorn squash, butternut squash, or even atop a hot and fluffy sweet potato!  You can also get creative with the leftovers by making a sandwich out of them.

My ULTIMATE after-Thansgiving sandwich is piled high with stuffing, crockpot cranberry sauce, and cranberry-walnut cream cheese spread and turkey. You can also make it vegetarian style with all your favorite side dishes. I’ve gone as far as to add mashed potatoes and hot corn to mine and pretty much died of yum!

This post was sponsored by Campbell’s Kitchen. Thanks for helping me keep the recipes free!

our favorite holiday side dishes: