Anywho!  I was recently reminded by my token ginger friend [ok BEST token ginger friend] that I left out an essential part of my engagement story.  I have the memory of a goldfish, and juicy details often get lost in the grand scheme of things.  So this post is for Jordan the ginger, who I love so much that I’ve promised to name my unborn child after him.  Though only if it’s a girl.

So at this point in the story, I was fairly certain Paul had been huffing so much jet fuel that he forgot to propose.  I spent my days at the office trying to bribe kids to eat their veggies while he spent the majority of his time getting hot and heavy with a helicopter.  Surely it must have slipped his mind.

One night, around the time I had given up on the concept of matrimony altogether, I flung myself into bed and onto something small, hard and totally foreign.  Paul has a habit of teasing me for being uber-sensitive since a single wayward hair-tie or crumpled blanket can make me toss and turn all night.  He used to joke that it was so very Princess and the Pea of me.  It quickly crossed my mind that he thought of the cutest freaking proposal of life.  Hiding a ring box under the mattress?  I could barely contain my excitement!

I squealed like a schoolgirl and tore back the sheets to reveal the box, only to find that I was sadly mistaken.  There was something under the blankets alright…  Earlier that evening Paul hid a freaking apple between the mattress and the fitted sheet.  Jerk.  I should have known better.  I had lost count of the number faux proposals I’d fallen for at this point, and this one had to be the worst [or should I say best?] yet.  So there I stood, holding a freaking apple, about to go from zero to nuclear, when Paul walked in… smirking like a goddamn cheshire cat.

The prank was unexpected, to say the least, but my reaction was slightly predictable.  I chucked the apple at him.  Then Bullet promptly ran off with it.  He acts fast when produce is on the loose. 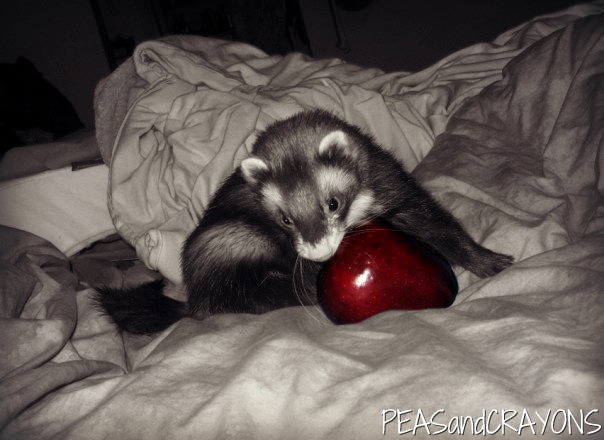 Naturally we poke fun at ourselves [ok ME, we make fun of ME!] quite often.
Our engagement shoot was no different.
F**king apples.
I’m aware this would be perfect timing to share an apple recipe with you, but to this day I absolutely refuse to buy them.  Seriously!  I do, however, purchase applesauce [because any type of apple abuse makes me happy] so I suppose you could make these:
Carrot Coconut Muffins &/or Fluffy Flax, Fruit, and Veggie Bread
If you show up at my house with an apple I will disown you.